In 2005, the United States Supreme Court held in the case of Illinois v. Caballes that when a trained drug dog sniffs a persons automobile, there is no search. As a result, no constitutional violation occurs. This is the case even if the police have absolutely no reason to suspect you may be carrying illegal contraband whatsoever. 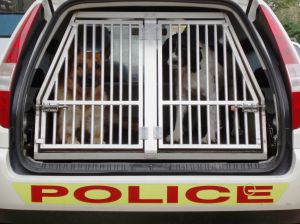 The majority reasoned that a dog’s sniffing is not really a “search” because it detects only contraband, and therefore does not compromise the privacy of someone who has nothing to hide. Justices David H. Souter and Ruth Bader Ginsburg both dissented strongly, warning that this decision could lead to “suspicionless and indiscriminate sweeps of cars in parking garages and pedestrians on sidewalks.”

The decision was not shocking, it was merely an extension of an earlier case decided by the Supreme Court in 1982 which held that the use of drug sniffing dogs to search luggage in an airport was in fact not a search either. (United States v. Place).

The thought of police running through the streets holding dogs on leashes to invade the privacy of all citizens brings to mind images of the Gestapo in Nazi Germany. As Justice Ginsberg said in her dissent in the aforementioned Illinois v. Caballes case:

“A drug-detection dog is an intimidating animal… Injecting such an animal into a routine traffic stop changes the character of the encounter between the police and the motorist. The stop becomes broader, more adversarial, and (in at least some cases) longer. Caballes –- who, as far as Troopers Gillette and Graham knew, was guilty solely of driving six miles per hour over the speed limit -– was exposed to the embarrassment and intimidation of being investigated, on a public thoroughfare, for drugs…”

Citizens should remember the disturbing images of police officers running wild through a Goose Creek South Carolina with dogs in hand:

Another huge problem with drug dog searches is the actual accuracy of the dogs in question. As Justice Souter stated in his dissent in the aforementioned Illionois v. Caballes case:

“The infallible dog, however, is a creature of legal fiction… [T]heir supposed infallibility is belied by judicial opinions describing well-trained animals sniffing and alerting with less than perfect accuracy, whether owing to errors by their handlers, the limitations of the dogs themselves, or even the pervasive contamination of currency by cocaine…

In practical terms, the evidence is clear that the dog that alerts hundreds of times will be wrong dozens of times.

Once the dog’s fallibility is recognized, however… the sniff alert does not necessarily signal hidden contraband, and opening the container or enclosed space whose emanations the dog has sensed will not necessarily reveal contraband or any other evidence of crime.”

A dogs accuracy may be challenged in court and may be a way of proving that a search was in fact illegal. There are several decisions which have led to the suppression of evidence based on a dogs inaccuracy. 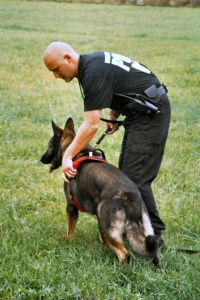 If you feel you have been the victim of an illegal search based on a “dog sniff”, you should seek out legal advice immediately. Our office has handled many of these cases in Nashville and Middle Tennessee and would be glad to assist. Please call for a free consultation (615) 428-0100.